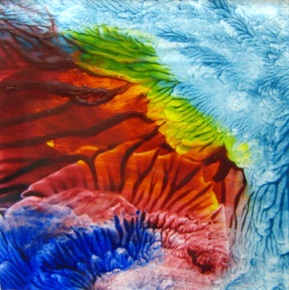 Bogomil's Universe is an excursion into the realms of the Inner Universe - a parallel universe that exists in the mind, and glimpses thereof are presented here. I am increasingly reluctant to speak of my work as strictly and exclusively surrealistic. While Surrealism provided the initial spark, and some of the methods of Surrealism are employed, I do not suppress the influence of the rational and selective focus. Thus, particularly in later works, there is to be found a conscious juxtaposition of the complementary forces of inspiration and reason.

I do not concern myself with the elimination of the rational, the exclusivity of the irrational and the absurd, but presentation of the conscious and subconscious world as an inseparable whole. I draw my inspirations from the layered labyrinth underground which represents the other side of life, which is an inner imaginative-inspirational counterpart to the outer world, expressed with the help of logic-alogic associations, analogisations and symbolism.

The paintings in the cyclus Bogomil's Universe are derived by creating textural surfaces, the method of Decalcomania as pioneered by the Surrealists, letting color, consistency and flow of the paint determine initial shapes, which are then interpreted by adding onto, or deleting. In the later works, films of gossamer-thin acrylics are stripped from non-absorbent supports (such as glass or plastic) and affixed, in a collage-like fashion, to the painting.

An article about the Gnostic Bogomil of 10th Century Bulgaria inspired the title of the first painting in the cyclus: Bogomil's Vegetable Garden. 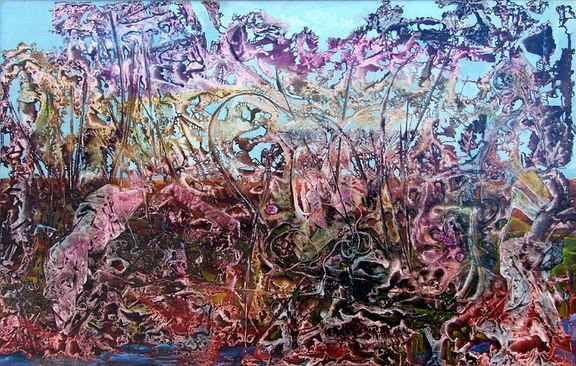 BOGOMIL'S VEGETABLE GARDEN
acrylic on canvas, 1976
For a time in history, the term bogomilism seemed to be associated, or synonymous with, outlandish and unorthodox beliefs. This, and the gnostic doctrine of dualism are the only touching points: at no time have I attempted to represent a literal, illustrative interpretation of the theme. Indeed, the detailed and lushly textured images presented would be anathema to the Bogomil belief that matter is irredeemably evil.

My interest in Religion and Mythology is particularly expressed in my drawings. Technically, they are counterpoint to the Bogomil Cyclus paintings, relying almost entirely on the action of the sharpened pencil point on virginal paper, as opposed to textured surfaces as inspirational departure points in my paintings. In both instances however, the outcome is not predetermined. The act of painting or drawing is a memorable trip into the uncharted realms of the Inner Universe, the results of which are presented to you here after the fact.