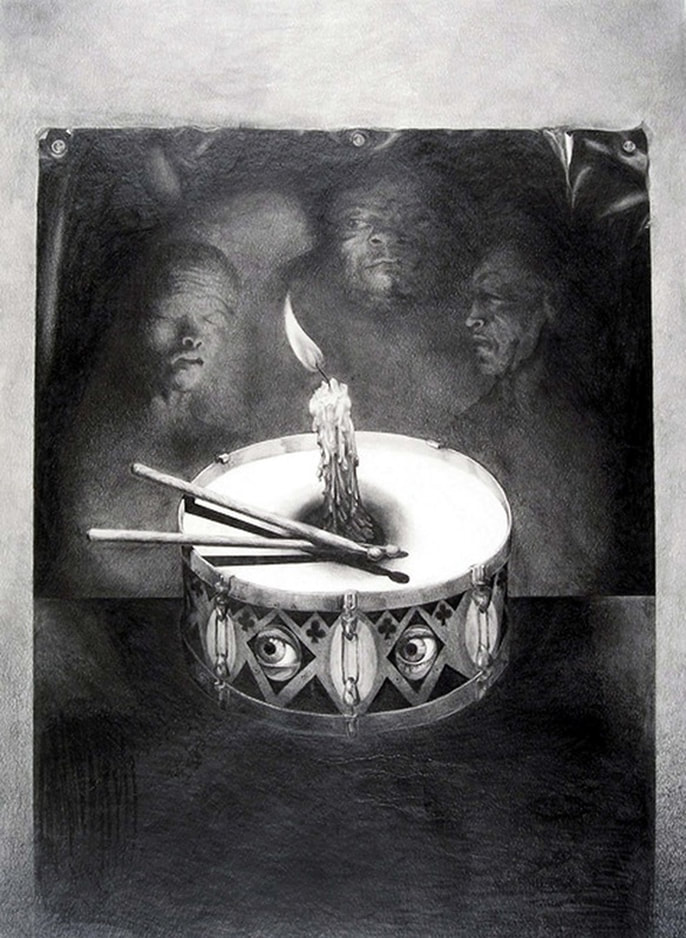 this drawing was a design for a poster for Pinter's play, The Birthday Party, commissioned in 1980 by the UofL Drama Department. The original was later sold to the Government of Alberta Provincial Art Collection.​
​The Space on top was left for the title, whereas the dark space on the bottom was supposed to hold all the other information, credits etc. I don't have a copy of the finished poster, but I was not pleased with what they did with it. In those days, there was no computer or a program like Photoshop available to me, otherwise I would have done it all myself. I just thought the printing department at the UofL would know how to do that.
​Plot of the Harold Pinter Play (from Wikipedia):

Act 1
Stanley, a failed piano player, lives in a boarding house run by Meg and Petey, in an English seaside town. Bill Naismith says that the play is set "probably on the south coast, not too far from London. Basingstoke and Maidenhead, southern towns, are evoked; and so is London––in both Goldberg and Stanley's reminiscences."

Act 2
On a day claimed to be Stanley's birthday by Meg, the boarding house is visited by two men, Goldberg and McCann. They throw a birthday party for Stanley through which Goldberg and McCann torture Stanley psychologically. This torture results in Stanley attempting to strangle Meg and to assault Lulu sexually.

Act 3
The aftermath of the party is observed: the drum, Meg's present to her beloved Stanley, lies broken on the floor; Lulu comes downstairs after having spent the night, regretting her participation in unnamed sexual activities with Goldberg; and Stanley is led downstairs by McCann unable to walk on his own or even speak.
Prints available here:

not in stock
A 1968 film version of the Harold Pinter play, directed by William Friedkin.
​With Robert Shaw, Patrick Magee and Dandy Nichols.